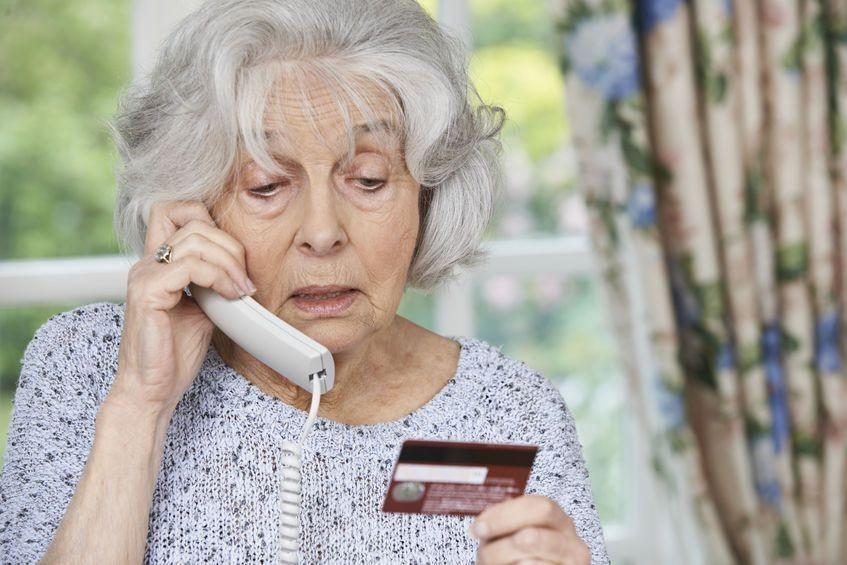 My poor mother, she actually believes anything someone tells her on the phone if they sound “nice”. Last week a well-known magazine sales company told her that if she just spent a bit more money she was sure to be entered into the final round for THE big check. Almost every few days a new package arrives with some trivial piece of cheap junk that she did not need and will not use.  When I ask her why she gives in and buys this stuff she tells me that, if she wins, she can leave the money to her family (my brother and I). It’s like she feels guilty if she doesn’t buy the junk to get entered into the drawing. And here’s the thing, they know this about her, they know she is a good, kind person so they take advantage of her. It’s like the way hungry wolves circle around the weak in a herd.

Unfortunately my mother is not alone, senior citizens fall prey every day to charismatic sales pitches, strong arm guilt tactics, and lies fed to them by companies and people that are determined to strip them of their hard-earned cash.  According to a report by the Consumer Financial Protection Board, between 2013 and 2017 suspicious activities targeting older adults had been reported by financial institutions over 180,000 times, totaling more than $6 billion in lost funds. Keep in mind, these are only the instances that were reported by financial institutions, the incidents not reported is thought to be vastly larger.

Fraudsters and predatory companies are very familiar with common senior services, insurances, agencies, and medical needs. They use their knowledge to exploit an elderly person’s vulnerability in order to win their confidence, apply pressure, or guilt them into giving up private information or purchasing something that they do not need. Last week a friend had divulged that her 82 year old grandmother, who was always a sharp business person, had been duped into purchasing a timeshare condo. Even after her grandmother passed away the timeshare proved to be difficult for the family to get out of.

For those of us who have elderly loved ones, we want to give them all of the independence they deserve but feel the need to protect them from the constant onslaught of predators. I find myself getting frustrated with my mother, even though she is clearly the victim, and just want to pull the phone off the wall (yes, she still has one of those phones). What gets me so mad is that a younger person, if taken advantage of, may have time to recoup some of the losses and is more likely to report the incident. However, elderly victims often don’t know that anything is wrong until the funds run dry. A senior relies on their savings and income in order to carry them through to the end of their life and there just isn’t an opportunity to earn any more once it is gone.

So, how do you deal with these predatory callers? Take the time to arm yourself with information on common scams that elderly victims typically fall prey to. The National Council on Aging keeps a very comprehensive list of well-known fraudulent scams against seniors. According to their report “Top 10 Senior Financial Scams” they state that scams targeting seniors are so prevalent that they are considered to be THE crime of the 21st century. The reason? Seniors are such easy targets and because they rarely prosecute they make the perfect victim. Goodness, how horrible is that?

Sometimes though, awareness alone is not enough. Being proactive, instilling solid phone rules, and following up regularly on phone records can help to keep unexpected issues from popping up. If you work with your loved one to establish when to answer the phone and when to let it ring it can help to alleviate many of the issues. Establish that just hanging up on someone who won’t take “No” for an answer or someone that seems untruthful is perfectly acceptable in today’s wild world.

There are also relatively inexpensive calling systems that can help you to create phone rules, allowing you to setup whitelists for trusted callers. Amazon offers a wide variety of phones that have call blocking built in and many national carriers like AT&T or Verizon will help you to set up call blocking or whitelisting to help better manage those unknown callers.

Get The Last Word

In order for authorities to be aware of scams and strong-arm tactics they must first be made aware of it. Whenever a caller calls a senior and the call was even just the least bit suspicious, it should be reported immediately. You can call the AARP Foundation Elder Watch  program at 1-800-222-4444, option 2 to report any type of elder fraud. Also, the FBI has a web page full of very useful information on dealing with fraud against seniors that is well worth the read.

I hope that you have found this information helpful. Please take a moment to repost, retweet, or share it so that we can help to spread the awareness about this important topic. It is our hope that, in the near future, crimes against seniors won’t be so easy and won’t go unpunished.

Subscribe Unsubscribe
How Palliative Care Saved My Grandmother
What is In-Home Care?

By accepting you will be accessing a service provided by a third-party external to https://www.senioridy.com/